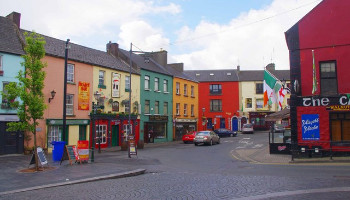 Athlone’s car hire depot is located west of the River Shannon among the town’s major business parks. It’s found in Monksland at the Motorpark, which is about a kilometre north of the M6 on Route 362. From here, it’s a short drive to hotels, restaurants and shops along the river.

The town of Athlone is compact and easy to navigate. Parking is easy to come by – both on the street and in covered, private car parks. This makes it easy to get around. If you’d like to leave your car and explore on foot, that’s an absolute option. At the same time, having that car at your disposal means that rainy days and excursions into the surrounding region won’t rack up major taxi fares.

As mentioned, a hire car in Athlone is worthwhile for the sheer convenience of navigating this town on your own terms. However, one of the most rewarding aspects of touring Ireland is the chance to get out in the countryside and enjoy the smaller towns, prehistoric sites and medieval ruins. The River Shannon valley has plenty to offer history buffs – especially to the north around Roscommon. With your own set of wheels, you’ll be able to see and experience it all.

Several petrol filling stations operate in Athlone, so refuelling your vehicle before you return it to the car hire depot is no problem. There are three Esso stations in town. One is northeast of the town centre on Ballymahon Road (N55). The other two are relatively close together on Galway Road to the west of the river – one by Monksland and another near Baylough. These latter two stations are particularly convenient for drivers who are based in the Athlone town centre.

Roscommon Road, which connects from Galway Road north to the N6, is served by a Topaz filling station. This is an equally convenient area for drivers in central Athlone to top up. The larger motorways that connect from Athlone to other towns and cities in the community are also well-outfitted with places to refuel.

Back to Athlone Car Hire